Thank you to Patty McLaughlin Cheshire and Children’s Heart Foundation-Pennsylvania Chapter for thinking of Riley and Our Family for this Event! We are So Excited to be attending this Sunday’s Eagles game against the Patriots! The Eagles have made sure we have Handicap access for Riley and all his supplies! Should be a Beautiful Day ♥ Please Join and Support Children’s Heart Foundation-Pennsylvania Chapter on Facebook!! Another Organization that has been Wonderful to Riley and Our Family ♥

Riley Had a Visit With Dr. Hanna (Cardiac) Today…. 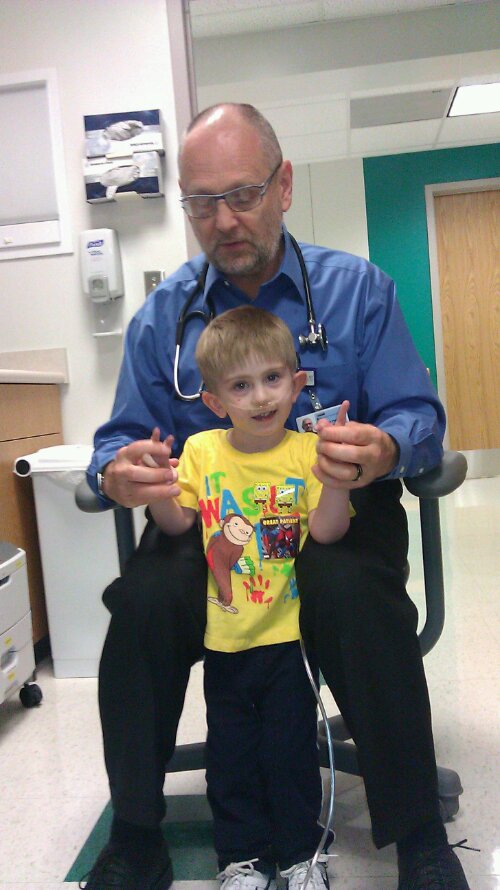 Today was a pretty routine visit to see Dr. Hanna. Riley’s Pulse was hanging in the upper 60’s which could be one of two things…He is getting a cold or its the progression of the disease! We are oddly going to hope for cold because the alternative is just to much to think about right now! Dr. Spray said around this age is when children in Riley’s situation start to run into more problems and eventually leading to their death…usually by age 5! Yea.. He said this when I was 5 months pregnant and here we are now! Problem… Spray has called everything down to the T with Riley so far! This is the one time I dont want Dr. Spray to be right! So we Journey on!
Unfortunetly (for some) this coming holiday is a busy transplant time because of so many accidents and people on the road! How can I pray that Riley gets his transplant for the holidays when that would mean another Family is losing their child at the holidays!? Thats just unimaginable to me ♥

Howie Mandel Retweeted about Riley for Me on Twitter! How Awesome?! Then all his followers began Retweeting about Riley! Thank You to All who may now have Joined Riley’s Journey…. We continue to wait for the Perfect Heart and Lungs….

Riley is Out of the Cath Lab….

Riley is out of the cath. Sleeping in the CICU. Dr. Rome did say that the narrowing is slowly progressing towards the lungs but is still accessible for dilation at this point. He too doesn’t believe the Gleevec is something that should be used for Riley. In the end transplant is Riley’s only answer. So… Eight Weeks Riley will be cathed…. Unless Transplant comes first ❤

Headed into the Cath soon…

Riley is first case Monday morning for his Cath. They have added Tylenol to his premeds. Immunology suggested this to try and prevent the “Reaction” he had after his last two caths. I dont see the connection but we’ll see what happens.
Dr. Goldfarb spoke with Dr. Spray regarding Riley and the Gleevec. His Opinion is the Same as Dr. Rome and Dr. Hanna and Now Dr. Goldfarb…. That Gleevec would not be beneficial to Riley. Dr. Spray believes we need to continue doing what we’re doing till Transplant! Dr. Goldfarb feels Strongly that Riley will be tranplanted Very Soon! (After 2 Yrs anytime would be soon!) He said that all the offers they have been getting, at least through Pulmonary, have been for Riley. That goes back to earlier in the week when I said he has Out Waited Everyone! That Literally put him at the Top of the List! Now we Need One of these Offers to be a Perfect Match for Riley!
I have to admit after 2 years it has gotten Crazy knowing that ANY SECOND the phone could ring and Our life will change Forever! The Crazier part is that 3 times during the summer we got that Life Changing Call and All Three Times turned into “Dry Runs!” ♥
Riley Will Get His Gift… One Day ♥

Beautiful Riley… Free of O2… on His 1st Birthday :)

Riley Has Been Waiting Two Years Today for His Gift of Life.. Bilateral Lung/Heart Transplant…

I would have never Believed two years ago that Riley would still be here waiting today for his Gift of Life! He has Out Waited every other child he was once listed with on both the heart and lungs wait lists!
Unbelievable!
I have to Believe, though, that Riley’s Time will come when EVERYTHING is Perfect for him to receive His Gift! This way not only will he receive the Incredible Gift of Life but the Ability to Use that Gift to the Fullest to Live Out a Long…Happy Life!