Hello to all!  I feel like there is alot to say, but I’ll try to sum it up as much as possible.

Friday Riley had an echo and a Cardiology appt.  There really is no point anymore of discussing what the echo showed, because we have yet to have one that is accurate.  The one on Friday didn’t seem to show much change, but remember that the last one that he had looked good and when he had the Cath. we found out that he needed transplant!  So Riley is being scheduled for a Cath within the next wk. He may need to be admitted a few days before the Cath so that we can stop his Plavix and Aspirin and start him on Heperin, but I’m waiting to hear from Dr. Hanna’s office to know exactly whats going on.

Next on the agenda are Thank You’s! First I want to thank Kim, owner of Kids Kuts in Voorhees, for having Kids Kuts for Riley!  Also Thank you to all the women who work there who were a part of the fundraiser!  Not to forget….Thank you to everyone who took there children for haircuts in support of Riley and our family!

Now a Thank you goes out to Cheryl.  Cheryl is a friend of Riley’s therapist.  She heard about Riley and began to talk about him to other people.  One of the people she spoke to about Riley was Rhonda Thompson, Milt Thompson of the Philadelphia Phillies wife.  Rhonda apparently went home and shared Riley’s story with Milt.  Well the passing along of Riley’s story lead to us having some very welcomed guests yesterday!  Milt, Rhonda and their daughter, Alyssa, came to our home to meet Riley and our family!  It was a wonderful visit!  After a short time it became like we were sitting with old friends!  Darren was thrilled to meet Milt and I am thrilled to have a new friend in Rhonda!

I will update when I know more about the upcoming Cath.

Here are some pics from the Thompson’s visit… 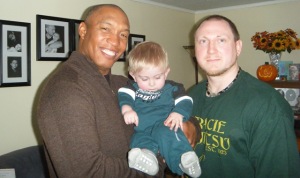 Hello to everyone….I have to say as I begin this blog that Riley “seems” to be doing really well considering he is waiting to receive three new organs!  He just “seems” to be the same old Riley!  My heart drops every time the phone rings…not knowing if it’s CHOP calling to come in for the transplant.  The thought of having to hand him over as he is now, and not knowing what is going to happen on the other side is heart wrenching!!  That said, though, we know we have to do this!  Riley really isn’t as good as he seems!  To give him ANY chance at life we have to hand him over for transplant and BELIEVE that he will come through on the other side and survive and thrive!!

We saw Dr. Goldfarb (lung) yesterday.  He listened to Riley for a second then I actually had Danielle take him out of the room.  He just wanted NO part of CHOP or pretty much anyone or anything there.  It was pretty much a visit of talking.  I did read there may be some concern of having cats after transplant.  I spoke to him regarding what I read, and he said the cats were fine.  Just make sure their shots are up to date, and Riley will NEVER have to clean the litter box! (Sorry Christian) Also if we should get any pets in the future they have to have their shots before being around Riley.  Soo..this was good to know.  If we had to get rid of our two cats I think Christian would have really lost it!

Riley will see Dr. Goldfarb again next month, but we will go in between for an education day.  He will also see Dr. Hanna (Cardiologist) the end of this month, and also have an echo that day.  That visit will most likely be followed by a Cath.  I’m just hoping Riley cooperates during the echo or he may need a sedated echo which would require a stay in the CICU.  Hopefully if that happens Dr. Hanna will decide to just move forward with the Cath. instead of having him sedated twice and having him have to stay in the CICU twice.  We’ll see….

On another note…..we went to Darren’s cousin, Dana’s wedding on Saturday.  It was a much needed outing!!  Thank you to my sister Chris who came over for a training on how to care for Riley, and then watched both of my boys ALL DAY Saturday so we could go to the wedding!

When we got to the reception there was a surprise waiting there for us!  Something I could have never imagined…this was Dana’s BIG day…and what Dana and the Hinton family did we will forever be grateful for!!  At EVERY place setting there was card….which I thought was like a menu for the dinner until I picked it up and read it…..this is what it said!!

In lieu of the traditional favor,

a donation is being made to the

Riley Curtis O’Brien is a

cousin, nephew and grandson of ours

he has Heterotaxy Syndrome.

This is a condition affecting his heart, lungs, and arteries.

We ask that everyone say a prayer

for him and his family.

We feel the finest gift is one which helps others.

Thank You for sharing in our special day.

How beautiful is that??  To think of our son and our family on their day of celebration is once again….BEAUTIFUL!!  Thank you also for the generous donation that you made to Riley and our family!!

One last note….at the reception I had the MC play what I believe has become our family anthem…it’s Bob Marley…Three Little Birds….If you get a chance to hear the song or if you already know the song you will understand why!!

Until later…..thank you EVERYONE for your support and prayers!!  Please continue to pray for Riley…that phone could ring at any moment, and our life will once again be changed forever!!

I wanted to let everyone know that as of today, 11/2/09, Riley is OFFICIALLY listed for a Heart-Lung Transplant!!